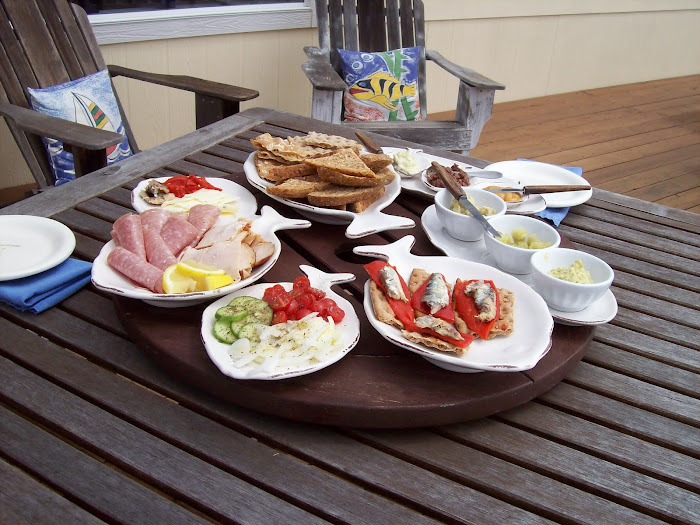 The Magic of Venezia!

We had tickets on the 11:30am train from Florence to Venice. Vilia and I made a quick dash to the leather market so she could pick up something she saw the day before while I took pictures.  Train stations in Italy are not at ground level for the most part.  You have to hike up steep steps hauling your rollies and carrying heavy bags/purses. Poor Mike was like the sherpa lugging many bags. I was managing to struggle up the steps of the Firenze S M. Novella when a nice man grabbed my bag and took it to the top. I was worried as we had had an incident with Gypsies when we left Rome. They swooped down and carried our bags onto the train which I thought was part of the service the trains offered. The woman then demanded 30 EU!!! We had given them all of the coins we had but that wasn't enough apparently. Fortunately they had to get off the train before it left the station so they disappeared as quickly as they had appeared, without our luggage thankfully. This man looked like a Gypsy but did not demand any money. I was like, "prego, grazie, grazie mille" and off he went with a quick wave.
When the train departed it was dreary, cold and drizzling rain. Soon after we left the station we were hit by a blizzard. I couldn't believe my eyes! By the time we got to the Bologna Stazione everything was covered with snow. Vilia and I were trying to snap pictures as fast as we could while the train zipped by the snow covered fields and hillsides. Just as I pushed the shutter button we would enter a tunnel. Between the two of us we did pretty good at capturing a few wintery scenes though.


This all changed as we saw a vast body of water ahead and headed over a long train bridge. It was exciting entering a city that was built entirely on a marshy lagoon. I couldn't wait to see the canals with the Gondolas which was about all I knew about Venezia. What adventures awaited us in this magical city as we stepped off that train I wondered.

We found our way to our hotel, "Principe" by crossing a bridge over the Grand Canal. As we entered the luxurious lobby I decided that I could get used to these 4 star Italian hotels. It was beautiful with delicate hand blown glass sconces and chandeliers and richly upholstered furniture but strangely soggy carpeting. As we later found out the Grand Canal rises and falls with the tides which results in flooding in all that sit on the Canal. No worries the guest rooms were above canal level. Our rooms were charming. The bathroom in Nate's and my room was a postage stamp however. You had to practically step over the toilet to enter the tiny shower stall. We were only going to be there barely 2 1/2 days so we decided not to upgrade as was suggested by the concierge. Let me say this, every 5- 10 year old little girl I know would have gone nuts for this fairy tale like room. The hand painted walls and ceilings with sweet glass vases, lamps and ornately framed pictures was like well a fairy tale room. As long as you didn't open the window. The restaurant dumpsters were located below and there was a strong odor of fish. I found out later that all of Venice has that fishy sea salty smell. We were lucky to be here in chilly weather as it wasn't too bad. I hear that it is unbearable at times in the heat of the summer. After we settled in ( deciding which bed was whose) we met Vilia and Mike in their room which was really darling too. They had a nice bathroom with a tub and Mike was in heaven because they had real ice machines. What a concept.


Nate' had visited here before so she was familiar with the winding labrynth of streets and alleys with no street signs ( our map was useless) and some of the popular sites that we had to see.  Today was Saturday and as we crossed the Ponte di Rialto to Campo San Polo, one of the districts, we were soon surrounded by shops, street vendors and crowds of tourists. My first impression was that I was in the New Orleans French Quarter. The shops were filled with ornate masks, beads, dolls and costumes. Actually they weren't costumes but beautiful scarves, hats, blouses etc. that I would associate with Carnivale. All of the food stands made us hungry. there were gelato stands, crepes filled with chocolate you could even get little plastic cups of wine.  We walked on through the unmarked twisty streets in search of a lunch spot. I wondered how on earth we would find our way back but Nate' pointed out that there is always a sign pointing to the Stazione FF.SS. S. Lucia. Just follow those. We followed her instead.

We found a cozy restaurant that was still open for lunch and we settled in.
Ostaria Al Garanghelo was a find. They specialize in seafood, have friendly waiters and a beautiful atmosphere of an old tavern in Italy, with brick walls, a collection of old Italian telephones, wine bottles, carafes and other antique artifacts. A beauty bakers table is the focal point. If you have time check out the link, they even provide a few recipes in the menu section and it is written just like an Italian with broken English speaks. 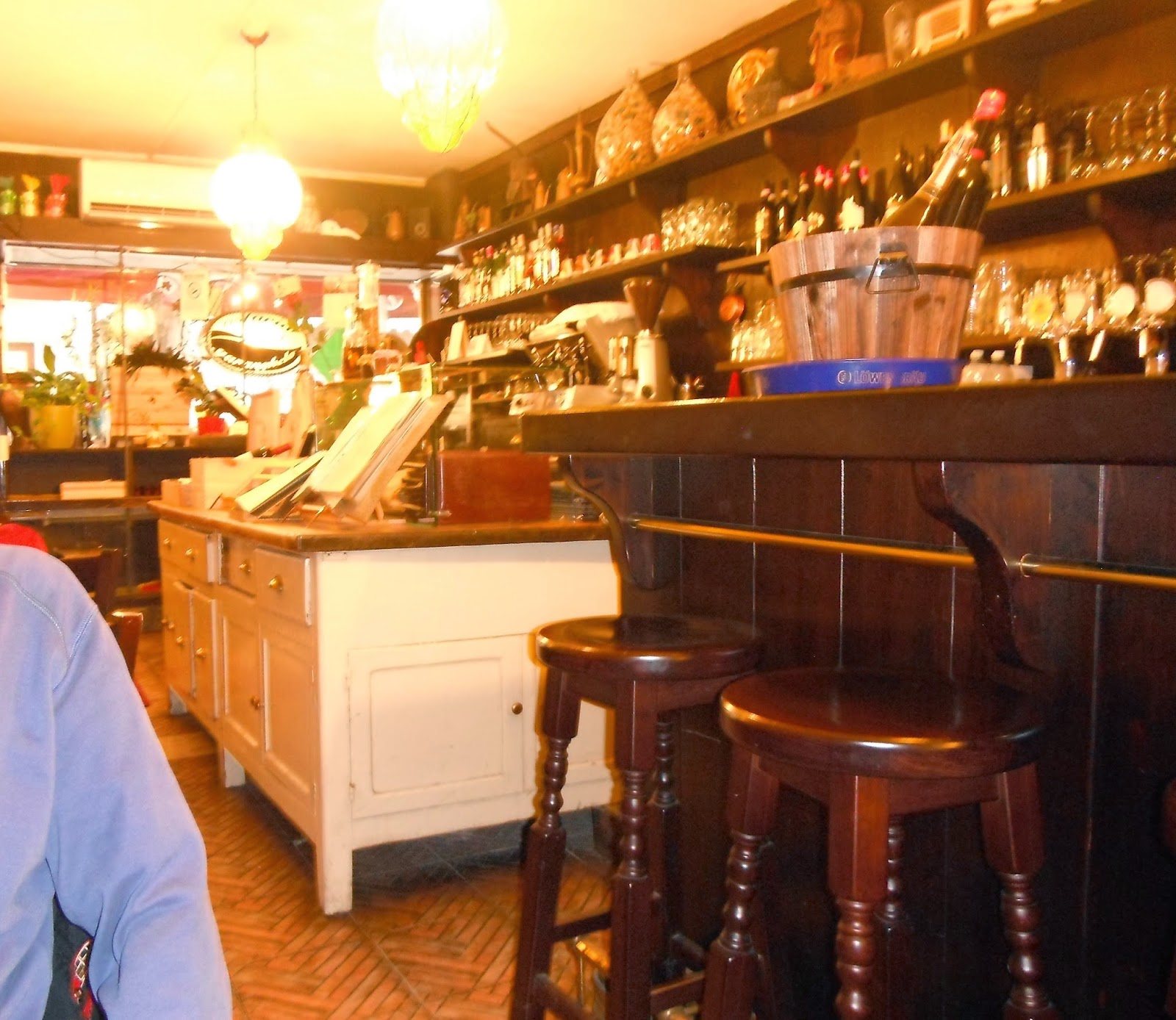 First off they brought us a huge jug of house Valpolicella. This region is home to the Soave whites and Valpolicella, Amarone and Bardollino reds..all of my favs.
Everyone ordered "normal things off the menu" Pizza for Vilia, Minestrone for Nate' and Pasta Bolognese for Mike. I, however, heard they had fresh crab for Antipasti so I ordered them grilled. Oh my! What a treat these were. They came three to an order for 10EU, all sizzling with herbs and olive oil.  I rolled up my sleeves and dug in with the heavy duty crackers they provided. It was a daunting task as I had to crack everything so I turned the crackers upside down and started tapping the shells until they cracked. It was so worth it. The crab was juicy and sweet! Everyone was finished before I tackled the last one. I passed tastes out and the concensus was it was delish but they were glad I was the one covered in crab juices. The waiters were standing around just staring at my bizarre attack on their crabs and finally offered more napkins. When you eat whole crab you can't hold back or you will starve. Satisfied with the pile of shells and stuff we paid the tab and were out on the streets again.

Vilia found a neat shop that made Murano glass pendants in all colors with the signature Millefiori (thousand flowers). She stocked up for future gifts, one of which came into my possesion at Christmas! We wandered into a beauty stationery store, "Rivoaltus" that featured marbled papers, glass pens for calligraphy, postcards with cats dressed in fancy costumes, leather bound journals and wax seals among other things. Venice was built in the 1500's and is home to many artists so everywhere we turned we were in awe of the beauty ( have I used that word enough yet?). I bought a set of postcards that featured cats dressed in Victorian costumes and blue sealing wax with two brass seals, one seahorse and one shell. I framed the postcards for my cat loving friend, Bonnie and rarely use the wax and seals but love looking at them. The lady had wrapped the set in marbled paper and tied it up like a little gift.
The problem with shopping in Venice is you have about a 20% chance of ever finding the shop you liked again, unless you drop breadcrumbs like Hansel and Gretel, the trail ends the minute you turn a corner. We found that out when we passed an old wine bar (bacari) and vowed to return. Just purchase what looks interesting when you see it.
Nate' and I tried to remember where the bacari was and wandered around a few twists and turns and were about to give up when there it was! Cantina Do Mori . It has been around since 1462 according to this link. The place looks like it with copper pots hanging from the ceiling and old dusty bottles of wine in the wine racks along the wood walls. The bartender told us they used to store the wines that they offer for sale on the racks but they kept disappearing so they found ancient cases of wine somewhere and use those for ambience. They list wine specials on a blackboard. Everyone stands around old wine barrels and sips their wine and nibbles on "cichetti" or little snacks. The kitchen was pretty backed and we were lucky to be able to order a few glasses of wine. A few local wineries back in California source Refosco, a red varietal, so when I spotted it on the blackboard it was a chance to try the real deal. Big, bold on the dry side. I liked it as well as the Bardolino and Amarone tastes we had. Unfortunately they weren't open on Sunday and we were leaving Monday morning or we would have spent more time there. I highly recommend this place even though it is small and crowded. If you google it there is a site that shows pictures of the interior and you can just feel the history surrounding you.
It was dark by the time we got back to the Hotel and it was cocktail time! Somehow a bottle of wine appeared in Mike and Vilia's room. Mike grabbed the ice bucket and off we went in search of that precious ice. This place is huge! We tried to remember how to get back upstairs and ended up walking around in circles but it was wonderful looking at the decor.The hotel's restaurant was very formal and pricey so we walked down the sidewalk to a  Tratorria that looked inviting and got us out of the rain that had started to pour down.  It was good with reasonably priced wines but must not have been that great as I didn't take notes on it. Actually we were freezing cold in Venice so to take pictures meant taking off the gloves, digging out the camera and at best shooting gray drizzly pictures.
It stopped raining so we decided to walk about a little. Wandering around at night is a challenge. If you don't watch out you could walk right off the curb and end up in a canal. It is so weird to see people's doors facing the canals with boats tied up. All of the commerce and shopping and deliveries and construction materials and even the trash pick up is done on the water. Taxis are Water Taxis with designated stops. We loved it!!
The next day, Sunday, we planned to explore more and go out to Murano the glass island. 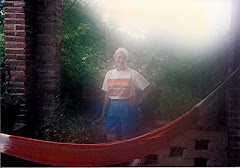 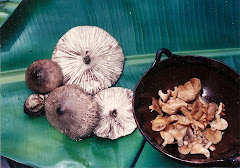 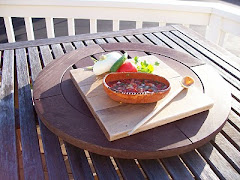